Encyclopedia of a Life in Russia

1
1
“A playful and poetic look at a nation at odds with itself and its infatuation with the Western world.” —Time Out New York
“Encyclopedia of a Life in Russia embodies the intelligence and absurdity of the Russian soul.” —David Bezmozgis, author of The Free World
“Prieto’s formally audacious novel . . . has genuine resonance in the age of celebrity, and it bubbles with energy and mischief. Quirky and consistently surprising.” —Publishers Weekly (starred review) 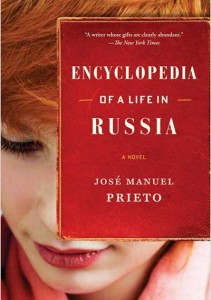 In Encyclopedia of a Life in Russia, acclaimed novelist José Manuel Prieto — whose Nocturnal Butterflies of the Russian Empire was hailed, in its Russian translation, as the first great Russian novel written in Spanish —  has masterfully crafted a kaleidoscopic portrait of the collapse of the Soviet Union. Strikingly poetic and slyly humorous, this is the story of an ironic outsider caught between old world traditions and the lure of contemporary Western influences as he tries to take in and describe what’s happening and understand this changing world and his place in it.

Related Links & Reviews for Encyclopedia of a Life in Russia